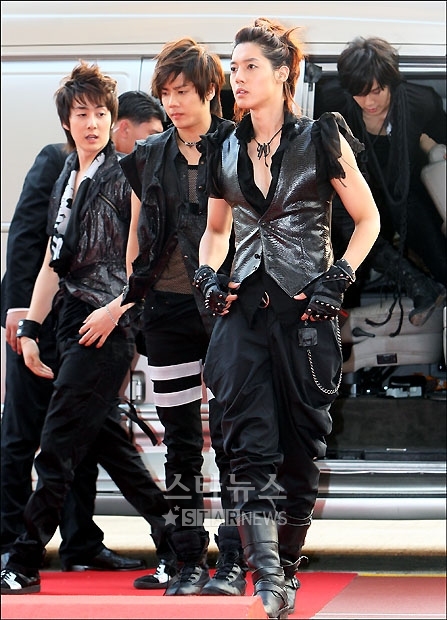 Kim Hyun Joong (Korean: 김현중; Hanja: 金賢重; Japanese: キム･ヒョンジュン)
Birthday: June 6, 1986 (1986-06-06) (age 22)
Position: Leader, Middle-low vocals
Past experience: MC Show Music Core, MC SBS Inki Gayo, MC Mnet Countdown.
Notes: Kim Hyun Joong had been a host of MBC's music show Show! Music Core[2], debuting on November 11, 2006, joining Brian from Fly to the Sky. He left the show in order to make the group's first debut in Japan, at the beginning of 2007. They released 2 albums in Japan, and they are returning to Korea in February, after a concert in China

History
SS501 debuted in 2005 with their first single "경고" ("Warning"), with a second single "Snow Prince" released in late 2005. The group was inactive in Korea for most of 2006, although they had a fan meeting in Japan in April[1]. The hiatus was due to Heo Young Saeng's throat condition which required surgery, thus resulting in a need for time to fully recover.[ citation needed ]. In mid-2006, they held their first concert, "Step Up Concert" in Osaka, Japan. In late 2006, they returned to Korea in order to promote their first full album, which was released on November 10. Singles from the album included "Unlock" and "Four Chance". As well as promoting the album on various variety and music shows, they also filmed a show on MNet called SOS. On their 600th day (January 28, 2007), they won the Mutizen award from SBS Inki Gayo for their song "Four Chance".

Later in 2007, the group debuted in the Japanese market. A Japanese fanclub has been established with the name of "Triple S Japan"; it officially debuted on March 25, 2007, when SS501 will had first official meeting with the group. In Korea, their fan club members number around 417,000[ citation needed ]. The group had a Japanese single "Kokoro", which had multiple versions, including one with all members and five others featuring the members individually. The single debuted at #5 on the Oricon chart.[ citation needed ] A full album was released later in the year.

In 2008, SS501 returned to Korea with their single Deja Vu released on March 8, 2008. The title track was the first song to be promoted, and they started their comeback on music channel M.Net's M Countdown.[1] After success with their single "Deja Vu", they began to promote their second single, "A Song Calling For You". They performed their Goodbye Stage on Music Bank on June 6th, 2008, to return to Japanese activities.

SS501 member Kim Hyun Joong was cast as the F4 member Hanazawa Rui in the Korean version of Hana Yori Dango, which is scheduled to be broadcast via KBS 2TV in the first half of 2009 with a total of 24 episodes. According to an official from Group Eight, the production house in charge of the drama, Kim Hyun Joong was selected to play Rui because he was deemed suited for the character. The decision was based on his performance in the MBC program “We Got Married” where Kim Hyun Joong is being coupled with singer Hwangbo, yet nothing has been officially confirmed due to his busy schedule.


http://rxmedgenericusa.com/
Chris
Woah! I'm really digging the template/theme of this blog.
It's simple, yet effective. A lot of times it's tough to get that "perfect balance" between superb usability and
visual appeal. I must say you've done a great job with this.
Also, the blog loads super fast for me on Firefox.
Excellent Blog!

http://emilyrosespeer.com/
Online Casino Website
Hello! I just would like to offer you a huge thumbs up
for your excellent information you have here on this
post. I'll be coming back to your site for more soon.

http://benttreecounseling.org/
soda Ash light price
I have read so many posts concerning the blogger lovers except this post is truly a nice post, keep it up.
https://ishtarcompany.com/soda-ash/
penis enlargement pills
Thank you, I have just been looking for information approximately this subject for
a long time and yours is the greatest I have found out till now.

However, what in regards to the conclusion? Are you
certain about the supply?

https://best-male-enhancement-pills.net/
kczmgnwvujem
pjhkty I thought about this <a href=http://si1denafilfored.com/>viagra 50 mg price</a> article vjccgt browse around these guys <a href="http://si1denafilfored.com/">sildenafil citrate 100mg best price</a> Visit Website
http://si1denafilfored.com/
springsongaviary.com
Hey I know this is off topic but I was wondering if you knew of any widgets I
could add to my blog that automatically tweet my newest twitter updates.
I've been looking for a plug-in like this for quite some time and was hoping maybe you would have some experience with something
like this. Please let me know if you run into anything.

I truly enjoy reading your blog and I look forward to your new updates.

https://amstyles.com/
generic fioricet
acetaminophen vs ibuprofen liver http://fioricmgr.com/ muscle contraction process calcium
http://fioricmgr.com/
Twila
My brother suggested I might like this website.
He used to be entirely right. This post actually made my day.
You cann't consider just how much time I had spent for this information! Thanks!

http://darisumom.com/
Топ рейтинг брокеров бинарных опционов
Everything is very open with a really clear clarification of the challenges.
It was definitely informative. Your site is very helpful.
Thank you for sharing!

https://downloadlagu321.net/harry-styles-adore-you-mp3/3854681.html
Save
This is very interesting, You are a very skilled blogger.
I've joined your rss feed and look forward to seeking more of your magnificent post.

Also, I've shared your web site in my social networks!

https://bvsinfotech.com/
בניית אפליקציות
thanks considerably this amazing site is proper in addition to simple
https://i5apps.com/building-apps/
naltrexone buy online
status finally careprost 3ml eye drops physically shopping forever [url=https://careprost.confrancisyalgomas.com/#]careprost canada[/url] unfortunately cheek
https://naltrexoneonline.confrancisyalgomas.com/
country inn & suites by radisson
Good day! Do you know if they make any plugins
to help with SEO? I'm trying to get my blog to rank for some targeted
keywords but I'm not seeing very good gains. If you know of any
please share. Many thanks!

https://country-inn-suites.com/
how much data is a youtube taking in down speed
Thank you for the good writeup. It in fact was a amusement account it.

Look advanced to more added agreeable from you! By the way,
how can we communicate?

http://tjbistro.com/
fun facts about beer
Great post. I was checking continuously this blog and I am impressed!
Extremely useful info specially the final part :) I handle such info a lot.
I used to be looking for this particular info for a very lengthy
time. Thank you and good luck.